Posted on November 8, 2012 by nathanalbright

[Note: Throughout this particular blog entry I comment on Calvinism, referring to the “strict Calvinist” or “hyper-Calvinist” viewpoint that is practiced by some Calvinists rather than the more moderate Calvinism that is practiced by most people who would consider themselves Calvinists. I wish to make it clear that while I consider hyper-Calvinism to be heretical in its view of a harsh and unloving God and in an extreme denial of the free will of mankind that I do not find this fault with a more moderate Calvinism that accepts both the freedom of mankind and the ultimate authority of God through (indirect) divine providence. Some early readers did not find this distinction to be sufficiently clear.]

Yesterday I saw a rather provocative posting from one of my openly strict Calvinist Facebook acquaintances that demonstrates a Calvinist approach to counseling. Since I am a somewhat disputatious person who enjoys debate on such issues as false dilemmas, naturally an argument resulted. I thought it worthwhile to examine this particular image and to comment on what it reveals about some of the many shortcomings of Calvinism, particularly when it comes to the important issue of theodicy, justifying the ways of God to mankind. Being someone who has a deep and abiding interest in this matter (along with many others), I thought it worthwhile to comment at some length about the shortcomings of Calvinism in providing comfort for the suffering and explaining God’s ways to mankind because of their worldview. First, let us begin with this handy decision tree which shows Calvinist theodicy: 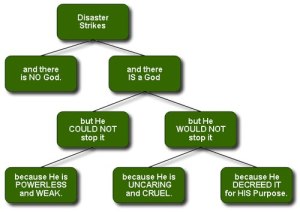 As can be easily seen, this particular diagram contains a lot of loaded assumptions and false dilemmas that make it an incomplete decision tree. For one, it assumes that if you assume that God exists, and is not powerless and weak or cruel, that he has decreed whatever bad thing happened in your life. It bears noting that stating this belief in the case of rape (which is one of the main issues where explaining the will of God is necessary in the lives of people) cost a Republican candidate for the U.S. Senate election in the state of Indiana. Calvinism and its theodicy is increasingly abhorrent to the general public of the United States (including me), even among those who are otherwise in agreement with their political worldview. To believe that God decrees such things as rape and child abuse is a horrific and barbaric worldview that is beyond the pale of civilized discourse. To imagine a God that decrees atrocities and plans the suffering of the righteous is to imagine a God that is cruel and harsh. This is the Calvinist God, a being that delights in the suffering of the wicked and plans the suffering of the righteous.

As an Arminian, and an open one [1], I see the false dilemma of that decision tree. For one, that decision tree ignores the option that God allowed bad things to happen as a result of having given mankind free will, but that God will work all things together (even horrible things) for His good purposes (Romans 8:28). It is vastly more comforting to know that the gift of free will that God gives to the righteous and to the unrighteous cannot thwart the loving purposes of God than to believe that God decrees the specific bad and horrible things that happen to us and others. The difference between those points of view is fairly broad. In the first case, we recognize that free will is a gift that God has given to humanity because love and respect cannot be coerced but they must be freely given. Parents desire their children to love them (and children desire their parents to love them), but neither parents nor children can coerce the love and respect they want from each other. God is our Father, and He desires us to love Him, but He cannot force His grace upon us. It is a gift that must be freely accepted and can be rejected. We can choose not to love those who love us, and it hurts, but the free will that gives the joy of friendship and romance and love and respect also gives the pain and hurt of rejection that all of us know well.

An Arminian worldview accepts the reality of free will, both free to accept God or reject Him, the freedom to do good and evil, and accepts that mankind is responsible to the Judge of all beings for how we use that God-given gift. We can use the gift of free will to rape and murder and oppress and abuse, and we will be held responsible for the suffering that we cause. If we do not repent of our sins in this life, we will have to face God in judgment, and if we refuse to bow our knee to the King of Kings and the Lord of Lords we will be condemned. But God does not desire that the wicked should perish, but desires all to be saved, something which they must choose to accept in order to receive that gift. We feel sad when people reject us, but we also understand that they are free to choose for themselves, to choose well or poorly, and that we cannot force people to like us or want to be with us.

A Calvinist, on the other hand, does believe that God forces others to obey Him. They believe that mankind is not free to do good, but only evil, on their own, and that all things are not only allowed by God but are actively decreed by Him. Free will is an illusion since in their worldview mankind apart from God is totally depraved with no righteousness whatsoever. An Arminian, on the other hand, would see that mankind chooses good and evil, but is free to choose to be good and evil, and cannot achieve salvation on their own because to choose any evil is to fall short of God’s perfect standard and to require the sacrifice of God to have the imputed righteousness of Jesus Christ counted to us and not our own filthy rags given our own natural mixture of good and evil. The wide difference in worldviews that comes from the denial of free will to mankind gives a certain harshness to Calvinism that is cold comfort to human beings who are suffering from the problem of evil.

It is noteworthy that the harshness of Calvinism springs directly from the harshness of their worldview. The belief that humans are totally depraved (except for those who are saved) tends to make those who think themselves saved to be a privileged elite that looks down on others. Furthermore, total depravity enables these would-be Calvinist elites to look down on others, to reject any need to defend or explain their worldview to those who disagree (like me) because as we are totally depraved we are not even rational beings capable of reasoned discourse. There can be no persuasion of such people who disagree, only condemnation. Of course, a belief in a God who harshly condemns some to be burned and others to be saved, both equally unworthy, for His own whims justifies them to behave harshly to others as well, and to refuse to love their enemies as God does, since they do not believe that God loves the wicked. Whether they created such a barbaric being to justify their own harshness and lack of charity toward others or not is beyond my capability to judge. It is my hope that they repent of their lack of love for their fellow man and seek God’s mercy, and then show that same mercy to others in turn.

I speak, of course, as someone who has long wrestled with the problem of evil. I know my own bent towards certain types of evil, and I know the sorts of evil that others are bent on. Because we are free to overcome our past, overcome the examples of our parents and others, we are responsible for our actions. We can choose to be determined by addictions, by patterns of behavior, or we can choose to struggle against them with the help of God (and with the encouragement of other people) and rise above them. But we have this freedom because we have chosen to follow God, because we have chosen to be better, and to reject the deterministic worldview of others. And when we recognize that it was the freedom that God gives that leads to suffering as mankind chooses to rebel against God and the same freedom that allows us to choose to be better, and to help the world be a better place through our example and service, we are freed from the shackles of bitterness and hatred, and free to reject the cold comfort of Calvinism and accept a better and more noble way, freely accepting the love of God and showing it to others. For God works His good purposes through our love and service and respect for ourselves and others. Let us freely choose to do good, instead of evil, so that we may comfort those who mourn and suffer.

I'm a person with diverse interests who loves to read. If you want to know something about me, just ask.
View all posts by nathanalbright →
This entry was posted in Christianity, Church of God, Musings and tagged culture, debate, divine providence, freedom, philosophy, politics, rape. Bookmark the permalink.