Posted on September 30, 2015 by nathanalbright

God And Churchill: How The Great Leader’s Sense Of Divine Destiny Changed His Troubled World and Offers Hope For Ours, by Jonathan Sandys & Wallace Henley 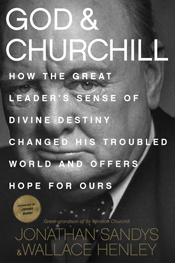 [Note: This book has been provided free of charge by Tyndale Publishers in exchange for an honest review.]

It is strange that in times like ours, where there seems to be an unraveling of society, and a loss of social cohesion, as well as a decline in the quality of institutional and societal leadership, that there is such a great importance in mining the lives of great leaders from the past. Given the fact that this book has a foreword and a preface by separate authors and an additional introduction by one of the co-authors, who happens to be a grandson of the subject of this book, it is obvious that a lot of people wanted to be involved in the promotion and creation of this book. Speaking for myself, Winston Churchill [1] happens to be one of the leaders whose life serves as an area of occasional personal study, in large part because he was an eccentric man of immense persistence and a great deal of unpopularity in the course of his life. What this book seeks to do is similar to the effort that is often taken to demonstrate the importance of the biblical worldview of Abraham Lincoln despite his outsider status with regards to established religion, an issue that Winston Churchill shares, right down to the youthful hostility to belief in general that was gradually moderated to a profound but indirect way. Churchill called himself a flying buttress with regards to Christianity–outside of the church but seeking to support its well-being.

In terms of its contents, this book, a little over 200 pages of material and a lot of endnotes, is divided into four parts and fourteen chapters. A great deal of the book consists of a deliberate contrast between Hitler and Churchill, and between Churchill and the utilitarian politicians who lacked the moral fiber to stand up to the evil that Hitler represented. The first part of the book deals with the following subjects: the preparation for leadership Churchill had through dramatic experiences, time spent in the wilderness, and family and personal adversity, including two parents who did not do a great job at nurturing and encouraging. The second part deals with destiny, comparing and contrasting the dark vision of Hitler with Churchill’s own intense sense of destiny. The third part looks at Churchill’s mission to save “Christian Civilization,” which, it should be noted, is not coincidental with Western Civilization, and contrasts it with Hitler’s corruption of Christianity to serve bigoted and narrow Volkish interests, a concept that appears over and over again in the context of Hitler’s racist and Darwin-inspired tribal ideology in this book. The fourth and final part of this book uses the example of Churchill to express a hope in our time that a leader with the requisite moral fiber and humility and tenacity born through immense adversity to serve as a savior figure for our troubled civilization. Clearly, at this point, our own chance for an enduring society would require help from above, as we are beyond the point where we can save ourselves even in limited ways.

The origin of this book is a fascinating one, and a matter worthy of recognition and reflection. Jonathan Sandys, one of the book’s co-authors, is the grandson of Winston Churchill, and like many of Churchill’s descendants, has had a tough time living in the shadow of such a great man. In understanding that his grandfather was a great man, but a man and not a flawless marble statue, he was able to reflect on ways that he too could find greatness and not be stuck in his grandfather’s shadow. In seeing the greatness and the humanity of his grandfather, Sandys has been able to find a great deal of purpose in teaching others about his grandfather and encouraging the development of the greatness of character and integrity that Churchill showed during the lead up to World War II and its successful execution. Surely, the crises of our own time, internal and external, are worthy of the same leadership, if God’s favor has not entirely departed from us.

I'm a person with diverse interests who loves to read. If you want to know something about me, just ask.
View all posts by nathanalbright →
This entry was posted in Bible, Book Reviews, Christianity, History, Military History and tagged England, family, political history, World War II. Bookmark the permalink.