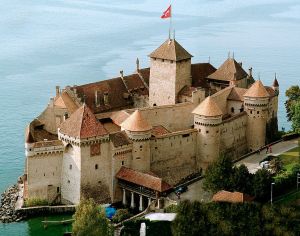 In 2004, I went to the feast in France, and as part of the tours that year, we went to a small town that I had not known very well beforehand called Montreux. Among the highlights, or lowlights, of the trip was a vivid reminder of the need to pay attention to biblical food laws outside of the usually known ones, including laws about cooking meat and not eating the blood. As it happened, the cook for the hotel where we were staying was making his last meal on the job for our trip to Montreux and he happened to make a version of steak tartar without the meat properly drained, bleeding on the rice, that nearly made me throw up to look at it (and, truth be told, I do not get nauseous easily). Since some members of our group were less scrupulous about obeying biblical laws than others were, I was able to trade a “food” that I was not going to eat for other food that I much preferred, and that kept my stomach full enough to last until dinner, when the food was properly cooked and edible.

Depending on one’s cultural knowledge, the small city of Montreux, which is an extremely beautiful place (albeit not a very good place to find free restrooms or inexpensive food), is known in a variety of ways. Some will know the city from its yearly jazz festival, and others will know it as the setting of the Deep Purple song “Smoke On The Water,” which was once considered to be the loudest music in rock & roll history. Still others, whose tastes are towards poetry, will know the city (and its beautiful castle) as the setting of a poem by Lord Byron, “Prisoner Of Chillion” [1], a poem about a very unfortunate man who was imprisoned in Monetreux for his religious beliefs, which prompted a military attack from the city of Bern which ended up bringing the area under the control of distant Bern and its German-speaking rulers for centuries.

What is striking about Lord Byron’s poem, which is one of my favorite works of his, is the way in which the prisoner of Chillon expresses both frustrating with his lengthy imprisonment as well as fear of the world outside, considering that he grew at home with his imprisonment and felt rather disoriented and uncomfortable with the thought of freedom. It is an easy thing to celebrate freedom for those who are used to it, but those who are not used to freedom often have a mixture of fear and longing, a longing because imprisonment of any kind is a terrible burden to deal with, and a fear because one has become accustomed to imprisonment and does not know how to handle the demands and pressures of freedom. If we do not know imprisonment ourselves (and, truth be told, it is not something that we ought to desire to know if we can possibly avoid it), at least we ought to be sympathetic to those in general whose lack of familiarity with good times and good things tends to make them as afraid of success as most people are afraid of failure.

Most of us look at a beautiful castle like the Chateux du Chillon and think of its beauty, not only in its architecture, but also in its situation on the side of one of Switzerland’s most beautiful lakes, Lake Geneva, along with other cities in the French-speaking area of Switzerland, in an area that did not gain its own freedom from Bernese domination until the French invasion of 1798. Ironically enough, the descendents of those who had kept guard over the prisoner of Chillon, and whose kinder treatment towards the end of his captivity was based on a craven desire for mercy, themselves were kept in a state of domination, albeit of a less harsh kind than they once meted on out others. Now that they have their own freedom, perhaps they can appreciate what was denied to others as a result of their own past.

It seems strange that a castle can be a prison, but that is not an entirely unfamiliar phenomenon. Many castles and other fortresses were built to protect people from threats, but all too often what may seem like a bulwark of defense from the outside world can just as easily become a prison when we are surrounded by threats and feel enclosed in our safe place with nowhere to go outside, and little ability to gain support and succor from the outside world given the fears that we have of our enemies there. If we are not careful, the walls we build to protect ourselves can easily hem us in. It is better, if possible, for us to be able to handle the outside world if we can, with all of the difficulties it faces, rather than try to hide behind walls that promise safety but which instead make us prisoners of our fears. There is enough in this world that wishes to imprison us, we had better not let our fears get the better of us.

I'm a person with diverse interests who loves to read. If you want to know something about me, just ask.
View all posts by nathanalbright →
This entry was posted in History, Music History, Musings and tagged freedom, music, poetry, Switzerland. Bookmark the permalink.

8 Responses to Prisoner Of Chillon