On Hitting The Wrong Target

If you drive on the highways, you will see that every one of the signs [2] that usually tell the driver how long it will take to get to a particular exit or landmark now say “Stay At Home.  Save Lives.”  It seems rather heavy-handed that this message was thought of as being effective.  Most people are staying at home and, possibly at least, saving lives, but those who see those signs are likely to be out and about for good reasons despite knowing that most everyone else is staying at or close to home, and the message, rather than giving useful and practical information, is instead communicating a sense of opposition and hostility between the department of transportation (presumably representing government interests) and the driver.  Yet would staying home for all drivers necessarily save lives?  If a truck driver is delivering supplies, such a person is doing good work and certainly saving more lives than he would if he stayed at home.  The same is true for those who are doctors and nurses, even if hospitals are not as crowded as they normally are because of the comparatively low numbers of Coronavirus patients and the cancelling of all “elective” surgeries.  Even ordinaryish office employees who drive around may be helping to save lives by doing their part to keep consumption and spending higher than they would otherwise be.

It is at this point that I feel it would be worthwhile to discuss the question of who is an essential employee and deserves to be outside.  I have looked, but not found anywhere where the state of Oregon, where I happen to reside, has defined such essential employees who are exempt from the stay at home directive.  In regulating my own personal conduct, I have sought to use available standards from other states.  Among the most complete of these is the state of NY which has provided a list of essential jobs [downloaded from Twitter]: 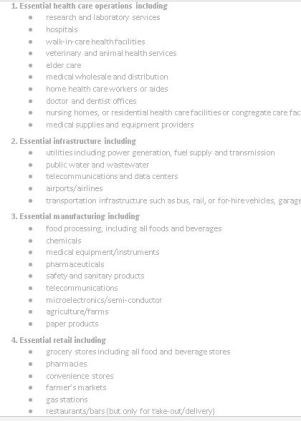 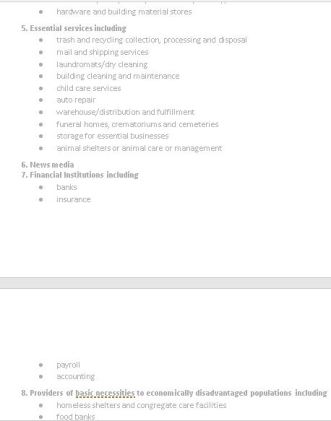 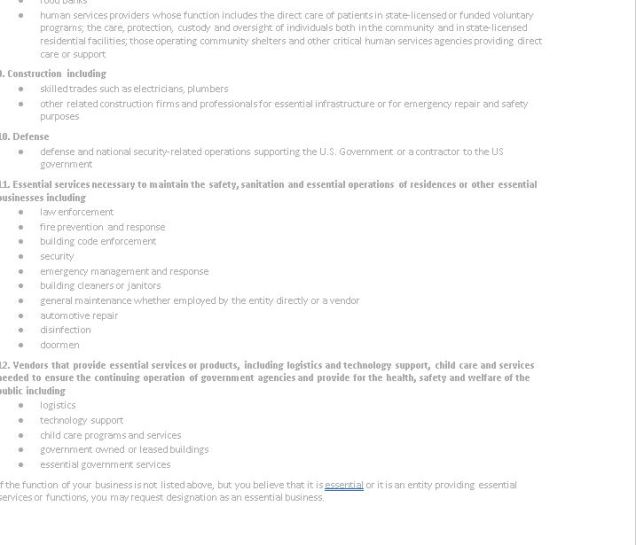 According to this standard, and I certainly think that it would apply to Oregon, my own job functions fit under category 7 for insurance companies, and would therefore be considered “essential.”  For this reason, at least, the vast majority of the people who read the signs on the road are in fact those people who are allowed to be out and about and who are performing necessary and useful functions with regards to technology, finance, logistics, and other services.  Yet they are the ones who are subjected to the subtle understanding that society both needs their work in order to function and also resents the fact that they are out and about when everyone is being told to hole themselves inside their rooms, which is not something that I would be averse to if it was possible to work in a timely fashion that way.  Are other people just better at ignoring such signs rather than being irked and offended by them?

The same is true when one listens to the radio.  There are praises to first responders, for example, but everyone over and over again is thanked for staying at home and engaging in social distancing.  Now, as a semi-reclusive person under the best of circumstances who has no difficulties with spending a lot of time reading and writing, this is not something I have a problem with in general.  That said, the only time I listen to the radio is when I am in the car, and the only reason I am listening to the radio as much as I am right now is that I have not been able to get books on cd as is my custom from the library.  The results are predictable, in that I am hearing a message that is based on false assumptions and am at least not very subtly being told that by not staying at home that I am doing something that is at least viewed as somewhat selfish.  Whether or not this is the intent or not, it is one of those situations where a message is being sent primarily to people who might take offense or umbrage with it in the name of some sort of vague idea of public health benefits for being a recluse.

Both of these messages (and no doubt many others) are an example of a message hitting the wrong target on several levels.  For one, many of the people who are out (like myself) have been out for good reasons and have been rather cautious and gracious in our behavior as we do what needs to get done.  Those who are deliberately violating such stay at home rules may indeed be risking the health of others but they are likely to rejoice that they are breaking the rules in the first place and not likely to pay heed to the pious cliches to stay home and stay safe anyway.  Those who are staying home and staying safe are not likely to be receiving the message of praise that the ODOT and radio stations are trying to give to those who are staying at home, presumably because they are binge-watching Tiger King or streaming on their phones or laptops and not being déclassé by listening to the radio when so many better options exist and are so convenient.  It is indeed a failure of communication when a message is sent only to those people to whom it does not apply and who it may either amuse or offend but who are not likely to take it seriously.

I'm a person with diverse interests who loves to read. If you want to know something about me, just ask.
View all posts by nathanalbright →
This entry was posted in Musings and tagged communication, health, legitimacy. Bookmark the permalink.